IBC, the International Brodcasting Convention in Amsterdam’s RAI trade fair centre, is the biggest annual broadcast technology event in Europe. This year it celebrated the 50th anniversary with a new record of 1,700 exhibitors and 57,000 visitors from all over the world during 5 days of the exhibition. In addition, the IBC conference covers all aspects of media technology in more than 90 sessions with 400 prolific speakers. Our technical coordinator Andreas Silzle from Fraunhofer IIS presented the ORPHEUS project in the conference session on Object- and data- based media,  Nicolas Epain from b<>com introduced their production tools in the Advances in audio production session. Having recently concluded the pilot phase 1, the IBC offered us the perfect platform to present our up-to-date achievements to the broadcast community (our papers will soon be available from the IBC website) 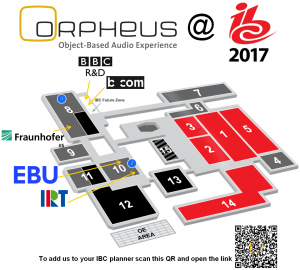 Various partners of the ORPHEUS consortium like Fraunhofer and IRT are longstanding participants of the show in the big halls. In recent years, BBC R&D and b<>com have become major attractions in IBC’s Future Zone, showcasing latest developments with disruption potential. In addition, due to the encouraging response after our workshop  at the BBC and the object-based audio seminar in Geneva, the EBU offered us to be prominently featured at their spacious stand, that is renown as a central point of interest for the exchange of new developments and the networking hub for Public Service Broadcasters. 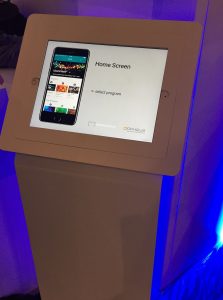 Our central focus was to demonstrate the benefits of our developments to the end-consumer. So, at the stands of Fraunhofer and EBU we’ve presented the ORPHEUS app, developed by our partner elephantcandy. It runs on iOS, using a MPEG-H DASH-stream as input and offering all basic object-based audio features: foreground-background balancing, transcripts, rendering into various audio formats (mono-stereo-binaural, 5.1 surround etc.).  To demonstrate these technical features we’ve provided the app with our pilot pieces of different radio genres: live soccer match report, radio drama, radio documentary, feature program. elephantcandy also designed a perfect way of presentation, by running the app live on a big iPad Pro in a presentation frame, especially developed for that purpose. This, too, was admired by many of our visitors. Along with that, we’ve also demonstrated the possibilities of using object-based audio in standard web browsers through IRT’s bog.js framework. This solution promises easy implementation in hybrid radio and TV devices. 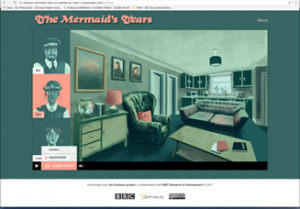 BBC R&D centred their presentation of the ORPHEUS project in the IBC Future Zone around their pilot piece The Mermaid’s Tears, produced as test scenario for their IP STUDIO in Broadcasting House London. Earlier, this interactive audio drama was broadcast live, making it the first live interactive object-based broadcast, where you can follow the story from the different perspectives of any one of three characters. Until mid-December, The Mermaid’s Tears is available on BBC Taster. Go and experience yourself! 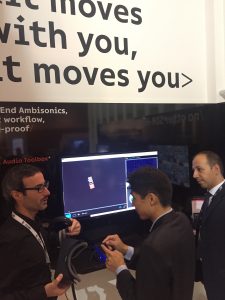 b<>com also benefited from the buzz in IBC’s Future Zone. VR and AR technologies and demos have become one of the major attractions on any media events. b<>com‘s plug-in suite Spatial Audio Toolbox  for Ambisonics and object-based audio perfectly fit into this constant quest for better and realistic immersion. Yet, the synergies starts to fling both ways. Check out our collected Tweets here!

Being also very active on Twitter, the b<>com account appeared at times being the second most influential on tweet statistics (behind IBC tweets), but we’ve also succeeded in ‘viralising’ mutually. So our joint but divided appearance at IBC 2017 resulted in even being covered in the IBC Daily as well as in various leading tech magazines during the show.

Get more impressions by clicking running through this gallery:

P.S. There’s also a video from IET published by IBC. Our colleague Andrew Mason from BBC R&D explains the concept of object-based audio and their work for ORPHEUS in pilot phase 1. 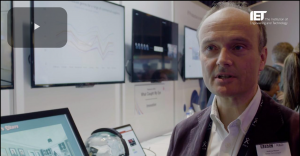