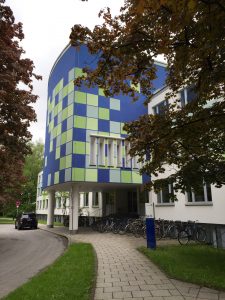 IRT in Munich – nicely located in a park

We were all looking forward having decided on IRT for our third meeting: Spring time in Munich! Working in a the park (at least a stylish 60’s architecture building located nicely at the rear end of BR’s spacious TV premises, north of the famous ‘Englischer Garten”) – enjoying ‘Biergarten’ in the evening. Well, blame the weather…

The project management team from Fraunhofer IIS and Eurescom got us prepared with a fully stuffed two day’s agenda, containing blocks and slots for all work-packages and tasks. Once again it showed that work-package 2 Pilots and Reference Architecture turns really out to be the ‘umbrella work-package’. The sketching of the end-to-end object-based broadcasting system along with the definitions of use cases and scenarios, leading up to realize our plans in two pilots, based upon each other – all this together has extensive influence on the other parts of the project, production, provisioning and presentation.

Very intense were discussions on the use of Higher Order Ambisonics (HOA) in our common project. The ‘object-based’ technology and the available audio codecs basically support this way of capturing sound. In addition, it actually seems to get a further push through the use in Virtual Reality and 360˚Video. Yet, as the ORPHEUS project is centred around and focusing on the broadcast eco-system, opinions of partners and stakeholders vary upon use case scenarios, applicability and benefits within this context. 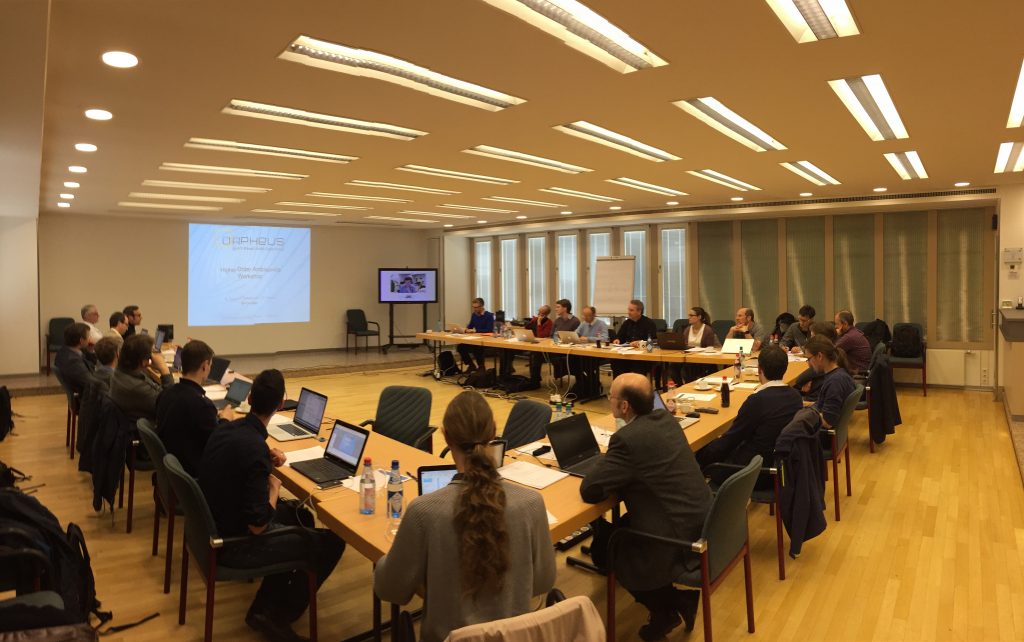 Full house during all sessions

One dependency in this discussion, outside the ORPHEUS project itself,  are developments and specifications on the capabilities of the ‘baseline renderer’. At present, high level standardization committees like  ITU-R, EBU and  SMPTE  are dealing with this issue. So, for the time being, a common effort, combining parts from both, ADM and MPEG-H, was agreed as a working basis. 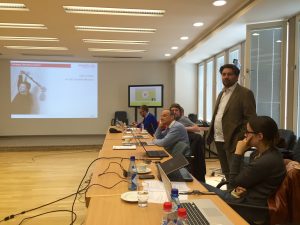 Invited as a ‘special guest’ on day two was Helmut Wittek, Co-CEO of renown German microphone manufacturer Schoeps. For Helmut this was also a return back to his roots, as he once had worked at IRT as research engineer before joining Schoeps. As the shift to an IP-based production environment is also part of our reserach and development project, it’s obvious that also microphones will become part of this new broadcast infrastructure. Already today, quite a few standards on the IP-roadmap are under construction or have been achieved, such as AES67. RAVENNA on a commercial basis offers practical solutions. And we’ll certainly will see more to come within project ORPHEUS runtime.

With all tasks running or about to commence by now (except pilot phase 2), we’ve shifted in full gear.

As usual at the end of the first day, hosting partners provide all participants with a guided tour through their house. IRT had prepared quite a few demos. What’s been talked about earlier that day, was now to be audibly experienced: MARVIN, a stunning sort of dummy head for capturing binaural signals, and EDDI, IRT’s prototype of object-based editor for spatial positing drew most of the attention. Finally we took a glimpse at IRT’s new 3D audio lab about to be finished. Then off for dinner to the nearby “Aumeister” (but it’s also nice inside).