Audio is in the DNA of a broadcaster. And German broadcasters can take a claim on history, that HiFi-stereophony got first applied in wartime Berlin 1944, Haus des Rundfunks Studio No.1, when Beethoven’s 5th piano concerto was captured on a 2-track tape machine.

30 years later, in 1973, ARD introduced Dummy Head Stereo as first 3DAudio broadcasting technology, and within a decade some 200 radio dramas/documentaries and 130 music recordings were made by German broadcasters in what we call today “binaural’. Lest to forget: the recording industry had started analogue quadrophonic sound also at that time, while the brilliant Michael Gerzon countered quad’s “wrong maths” in devising Ambisonics – both formats never made it into broadcasting.

Thirdly: After digital 5.1 surround sound had launched 20 years ago on satellite TV, two audiophile lead engineers at BR and WDR pushed towards using this format also for radio in concert transmissions and radio drama respectively. Therefore, BR does have broad experience and full facilities throughout the whole production and transmission broadcasting chain for “2D spatial sound”.

Yet, getting things with object-based production tools now into 3D means toddling first steps into another dimension. So it is good to first recollect what you know and what you can, and then cautiously step forward with some helping hands and walkers.

We set off in an internal workshop, bringing creative people – authors, editors and producers – in touch with our techies – software developers, audio engineers – after having them introduced to the ideas and first best-practice solutions of object-based media. It was thrilling to see ideas and concepts bubbling out within a few hours: more engaging football radio reports, stories to explore with your ears, immersive music production, and more.

Of course, some of the ideas would take a long time to be realized. But the quick win for all was to get into a mindset for the new possibilities of next-generation audio and dare to consider more, how sound and space would add to stories to tell.

Then there was the unique opportunity to combine history, present and future of audio production by staging the re-enactment of a “Dummy Head Stereo” radio drama production. We have been supporting Stefan Krebs’ University of Luxembourg research project on “Failure and Success of Dummy Head Recording“ already for some time, giving him access to our archives and getting him in touch with ex-colleagues having been involved then. Then he came up with a brilliant short piece on the re-discovery of the dummy head and we instantly knew, this is also a singular possibility to not only recap and pass-on what experienced engineers know about binaural to their successors, but to use legacy, present state-of-the-art and experimental new tools from the ORPHEUS project simultaneously: historic Dummy Heads, along with first order Ambisonics, ORTF-3D and discrete microphones, delivering a variety of spatial audio formats to listen, compare and experience the strengths and deficiencies of the various spatial capturing and reproductions approaches.

From here on we went deeper into object-based thinking, by commissioning one of our audio enthusiastic science reporters, David Globig, to conceptualize a piece explaining and demonstrating the technology and their possibilities in medias res to his listeners – pure radio: just words and sounds. In the course of this, we were also able to re-enact a typical radio football report to demonstrate the advantages of object-based features for a mainstream radio format.

For all of these experiments we moved into BR’s Studio #9, dedicated mainly to und fully facilitated for radio drama production. The acoustics there match only to a limited extent the requirements of music production. Nevertheless, we’ve invited the virtuosic Passo Avanti ensemble for a session. They brought along a jazzy adaption of Mozart’s cute little Gigue. In this arrangement, the main thema constantly moves through all instruments, clarinet, violin, cello and guitar. So we have asked them to line-up in a 360º tableau, making this ‘chase’ audible in 3D. Again, we’ve used various microphone set-ups for capturing simultaneously different sound perspectives and preserving multiple-options for mixing in immersive and object-based audio solutions. 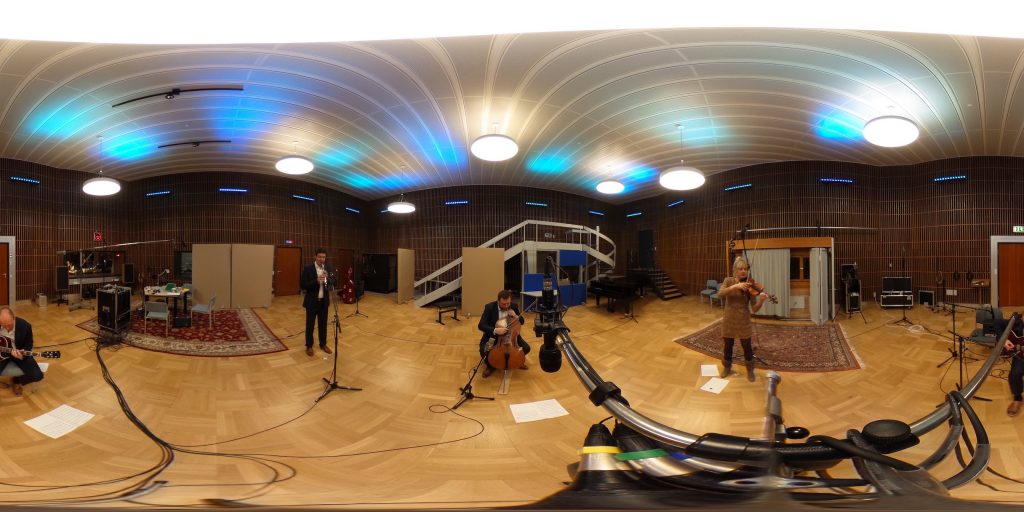 Then, luck stroke again when our radio documentary department decided to produce a feature on the “The History and Art of Foley Making”. The producer assigned, Börnie Jugel, who had participated earlier in our NEXT AUDIO workshop, decided to take a chance for an accompanying binaural production, in addition to the standard format and workflow. So here we were confronted with new issues on how to capture some the examples outside our ‘controlled studio environment’ with existing methods and devices, while still saving all possible options for an object-based editing and mixing later on. The biggest challenge of them all was to record the historic ‘thunder run’ in Munich’s Residenz Theater within a 30 minutes break of the stage workers and previous only 90 minutes for installing gear. We managed to mic the place in 7 different acoustically interesting positions on a total of 36 tracks for this incredible noise of 50 heavy weight metal balls, once released and unfolding, over within 10 seconds.

The historic ‘thunder run’ (red quadrangle shows the location) with the positions of the microphones (red, blue, purple dots) 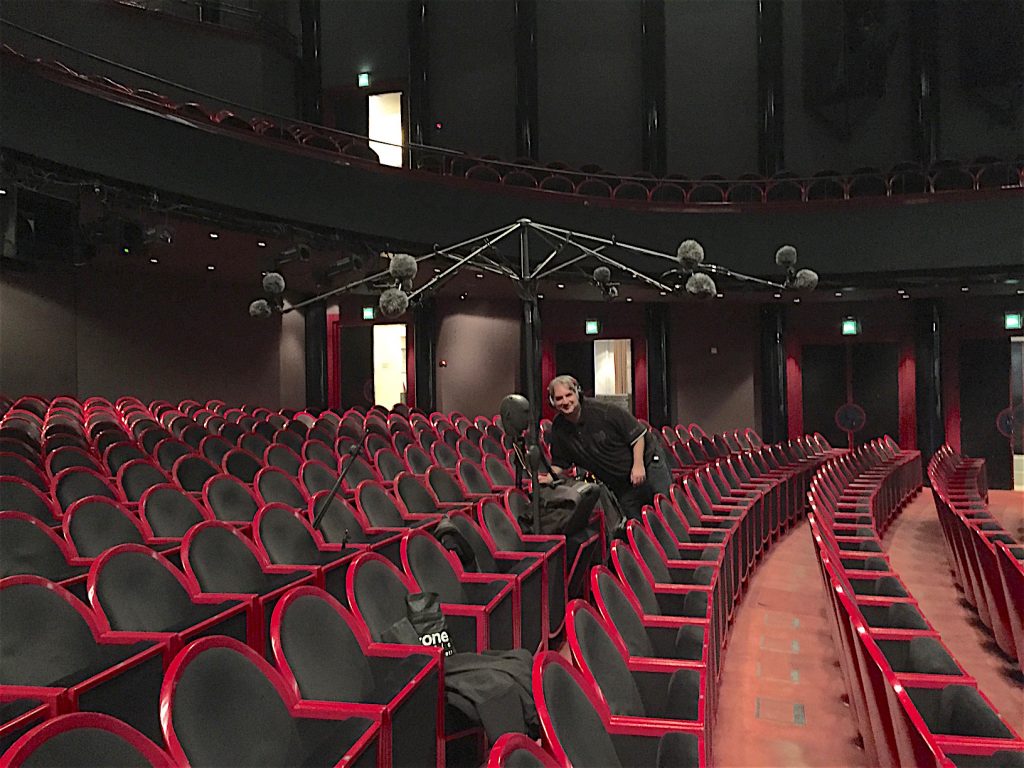 Helge Schwarz setting up his ‘Surround Sound Umbrella’ on the best spot, the ‘director’s sest’ at Residenz Theater Munich

The full length documentary was going on air in two versions, the normal stereo mix and the object-based pre-rendered binaural mix. Both are available for download from the BR’s website.

Some weeks later, at IRT’s AudioLab we were finally able to listen to the object-based mix in a full-blown rendering output  on 40 loudspeakers and compare the spatial resolution with that from the binaural version. It was very impressive. But also enlightening to experience where there are still things to be considered in spatializing sound events in order to maximise the perceptional effect.

For the ORPHEUS project’s pilot we now want to create an abridged ‘highlights’ version of this production with English language narration, including various quotes of the piece in their original English and French wording.