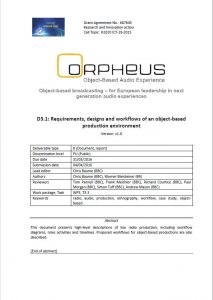 Radio has been produced since the 1920s, during which time the process has evolved with emerging technology. However, the process has remained broadly similar since then and has not yet fully exploited the opportunities presented by modern networking, semantic audio and data management technology. In considering how to design a new object-based production environment, it is important to consider the current techniques and workflows which have evolved over more than a century.

This report aims to give an overview of the requirements, designs and workflows behind today’s radio production, and considers what they might look like in an object-based world. This will be the basis for developments by the ORPHEUS project in creating a new object-based production system.