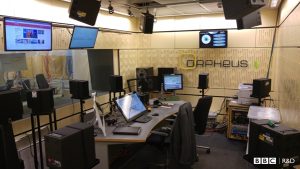 ORPHEUS is focussed on delivering innovative new experiences using object-based audio. These experiences require a rich set of data that is currently not captured in traditional broadcasting environments. As part of our work on production systems, we have built a prototype radio studio, which we are using to experiment with new methods of capturing and producing object-based audio.

The ORPHEUS studio is located at BBC Broadcasting House in London. It is powered using BBC R&D’s IP Studio system, which enables us to capture, store, process and transmit audio and data over IP technology on commodity hardware. The studio houses a 7+4 speaker setup for producing immersive 3D audio content, and a large touchscreen monitor for experimenting with new interaction techniques.

On the other side of the window is the ‘Internet Fit Radio’ prototype studio. This is where BBC Radio Engineering are experimenting with IP-based equipment and object-based recording. We are working closely with them to move towards a shared vision, and we will soon be connecting the two studios so that they be used side-by-side in future productions.

Over the coming six months, we will be building innovative new tools for composing audio programmes and capturing a rich set of production metadata. We will be working closely with production colleagues at the BBC to ensure that our tools complement their existing workflows whilst using the latest technology to maximise the depth and quality of data that is captured.

The principles and technical details of the ORPHEUS prototype studio are explained in detail in ORPHEUS deliverable D3.4, “Implementation and documentation of live production environment”.