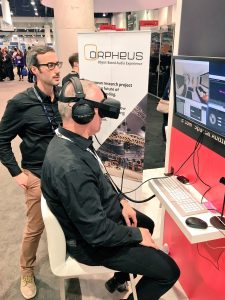 This year’s NAB Show on 24 – 27 April 2017 attracted more than 102,000 registered participants from over 160 countries to the Las Vegas Convention Center. They wanted to see what the more than 1,700 exhibitors had to offer in terms of innovative products and services in the areas of media, entertainment and technology.

One of the exhibitors was ORPHEUS partner b<>com, who presented the ORPHEUS project in a section of their booth in the Futures Park area. The ORPHEUS demo presented at the booth fitted the major trend of this year’s NAB show, which was “VR everywhere”, with a special focus on immersive audio technologies.

During the five exhibition days, over 300 visitors from the US, Canada, Korea, China, Brazil, a number of European countries and others visited the booth. ORPHEUS particularly raised the curiosity of numerous broadcasters, service providers in the media business, industry alliances, including the Advanced Media Workflow Association (AMWA), and a group of researchers from NASA.

The researchers from b<>com presented an immersive audio/video experience, consisting of a 360° video in stereoscopy, i.e. providing depth, and a 3D soundtrack that i rendered dynamically as the viewer moves his/her head around. As a world premiere, the 3D audio mix produced by b<>com was presented for the first time at the NAB show.

The demo was inspired by two objectives:

The positive response by the audience showed that the b<>com team fully succeeded in achieving this.