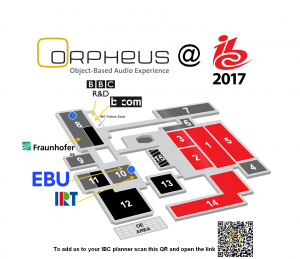 Amsterdam, 14 September 2017.  IBC 2017, the world’s leading media, entertainment and technology show, has started today. It will run until Tuesday, 19 September. If you are attending, use the opportunity to visit one of the five booths, where ORPHEUS results are shown.

In the exhibition, ORPHEUS is represented at the booths of BBC Research & Development, b<>com, Fraunhofer IIS, and IRT. Courtesy of the  EBU (European Broadcasting Union), we are also be able to showcase our work at their central booth in hall 10.
List of booths showing ORPHEUS results

ORPHEUS is also contributing to the conference, with a paper on “The EU Project ORPHEUS: Object-based Broadcasting – For Next Generation Audio Experiences”, presented by project coordinator Andreas Silzle from Fraunhofer IIS. Further papers will be presented by ORPHEUS partners.

In addition, ORPHEUS is an IBC Innovation Award Entrant. The ORPHEUS aw

ard entry with the title “The EU Project ORPHEUS: Object-based Broadcasting for Next Generation Audio Experiences” is available on the IBC Innovation Award Entrants page.